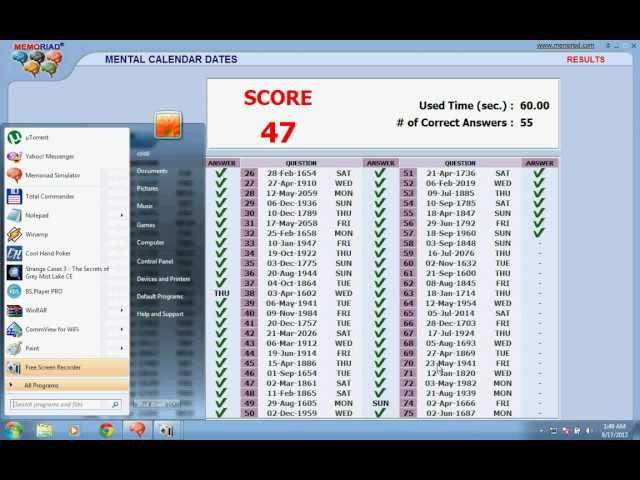 Instructions: How to calculate weekdays

The Gregorian calendar, which is now used worldwide (named after Pope Gregory XIII) was created at the end of the 16th century as a result of a calendar reform. Therefore the calculation of weekdays is possible from the 16th century on.

You need the following five numbers for the calculation:

7 will be substracted from the day's digit until it is no longer possible. Only the carry-over will be needed. It will always be between 0-6.

These are the monthly figures that you have to remember:

The basic values ​​for the centuries are the following:

28 will be substracted from the year's digit until it is no longer possible. Only the carry-over will be needed. It will always be between 0-28. Then we still need the centuries' basic values.

Optionally, you can also calculate these numbers on your own by dividing the accumulated dates by four. Only the remainder is important which you will get after having divided the total sum by 7.

Up to present, we have added the leap day to the whole year. This means that our calculation is only valid from 1 March on. If the date falls within a January or February of a leap year, a 1 must be deducted.
Leap years are all years that are divisible by 4. Century years are only considered leap years if they are divisible by 400.

Determine the day of the week

How does the number get to your brain?

To reach our goal, we are using a story based on the Number-Shape System (Association)

The week starts on Monday.

This is very simple, isn't it?

There are different disciplines:

There are two different lengths, 1 minute and 5 minutes. The better you get, the higher will be your level.

These are the different levels: