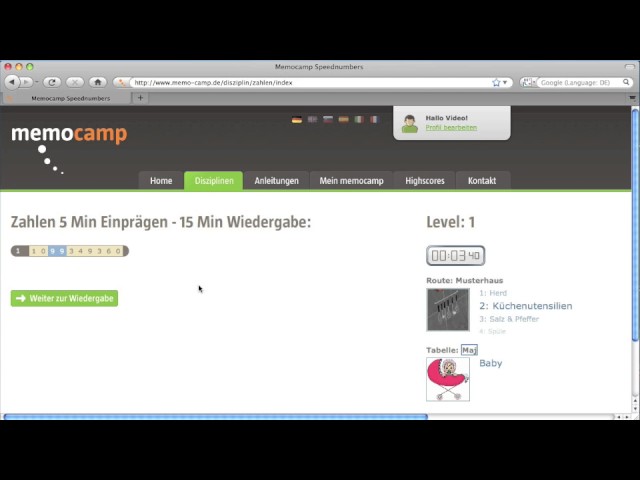 Our brain considers numbers as very abstact things. As a child you usually learn numbers by repeating and reciting them in the right order. However, if one is asked to memorise numbers in an arbitrary order (not from 1 to 10), the average person can only memorise up to 6 to 8 digits. In most of the cases, he uses his short-term memory and tries to register the numbers through frequent repetition. However this method is only partly successful and is no fun at all. The aim of memory training is to memorise more than "only" one single telephone number and to have fun practising it!

The human brain thinks mostly in pictures. Try to think of your refrigerator: What happens? You did certainly not think of the word "refrigerator" but you had a picture of a refrigerator in mind. This fabulous quality of the brain can also be used for memorising numbers by finding a picture for every digit.

Memory artists have developed different systems which are, for example, based on the visual aspects of a number or its pronounciation. By combining these pictures and including them in little stories you will be quickly able to memorise much more more digits than you could memorise by using your short-term memory only. However, given that the story method also has its limits we will use the method of localisation of journeypoints.

Memocamp offers assistance for 3 different "translation systems", which are accessible for newcomers under "My memocamp". To remember only a few numbers, the small memorisation system is sufficient, the so-called "small 1x1". To remember more digits, you can use the extended version, the "small 1x1 PO". The "Major-System" is the star of all mnemonic systems. Today, almost all memory athletes use this system.

How to train the memory for numbers: Number sprint

In this discipline you have to memorise as many digits as possible. In the first discipline the time limit is 5 minutes, the recall time amounts to 15 minutes. To make things easier at the beginning, there are different levels depending on your training level. There are 10 digits at the beginning which will increase to 20, 40 and so on... You will find a detailed division below.

The evaluation is based on the championship rules, meaning that if one row was recalled incorrectly (or was missed), you will only receive half of the points. Example: if you have to recall 40 digits and 39 digits are correct, you will get 20 championship points.
If there are 2 or more wrong digits in a row, you will unfortunately get no championship points at all.

These are very strict rules. If in a memorised telephone number an error occurs, you might reach someone, but not the right person. This means you have to be a 100 percent correct! Nevertheless, to make it a little easier, there is an addition of 40 numbers (1 row) from Level 7 onwards. That allows you to reach the next level even when you made a mistake.

These are the different levels: